Puerto Rico's architecture is a diverse mixture of different cultural and artistic influences, reflective of the island's history. You will find Spanish Colonial, Gothic, Neoclassical, and Baroque architecture styles in close proximity to each another. It's no surprise that San Juan is home to over 400 historical buildings, many great examples of the dichotomy between classic architecture and old military power.

The indigenous peoples of Puerto Rico inhabited the island long before the arrival of Columbus and Spanish colonists. The Taino people used mahogany and guano (dried palm tree leaf) to build their houses and furniture.

Tainos lived in villages called yucayeques. There were two kinds of living quarters, the bohio, which was circular in shape, and the caney, which was larger and rectangular in shape, both made of tree trunks, wooden posts, and palm leaves. The floors were dirt.

The deep influence of the Spanish colonists is evident throughout the island, as seen in the narrow, winding cobblestone streets and the pastel-colored, tile-roofed buildings with ornate balconies and heavy wooden doors that open onto inner courtyards in the style of Andalusia in southern Spain.

As Spain strengthened their power on the island, settlements were arranged in traditional grids, designed to accommodate government and military buildings, along churches, commercial, and residential structures. Spain ordered that the city be protected by sandstone walls and massive fortresses, since the island was the first port of call for galleons entering the West Indies and the last safe harbor for ships, laden with treasures, making the return trip to Cadiz or Seville. Because Old San Juan had no space for expansion, new buildings had to be erected to the east of the old town, in what is known today as the modern city of San Juan. Thus, most of the old structures have survived more or less since the 16th-century. The most notable of these include El Morro Fortress, the San Juan Cathedral, and the Dominican Convent.

El Morro Fortress, largest in the Caribbean, which has stood guard over San Juan Bay for more than four centuries. Began in 1540 when King Charles V of Spain authorized its construction, including the surrounding walls and completed in 1589. In 1973 it was declared a "World Heritage Site," putting it in the same class as Versalles, the Taj Mahal, and the Egyptian pyramids. 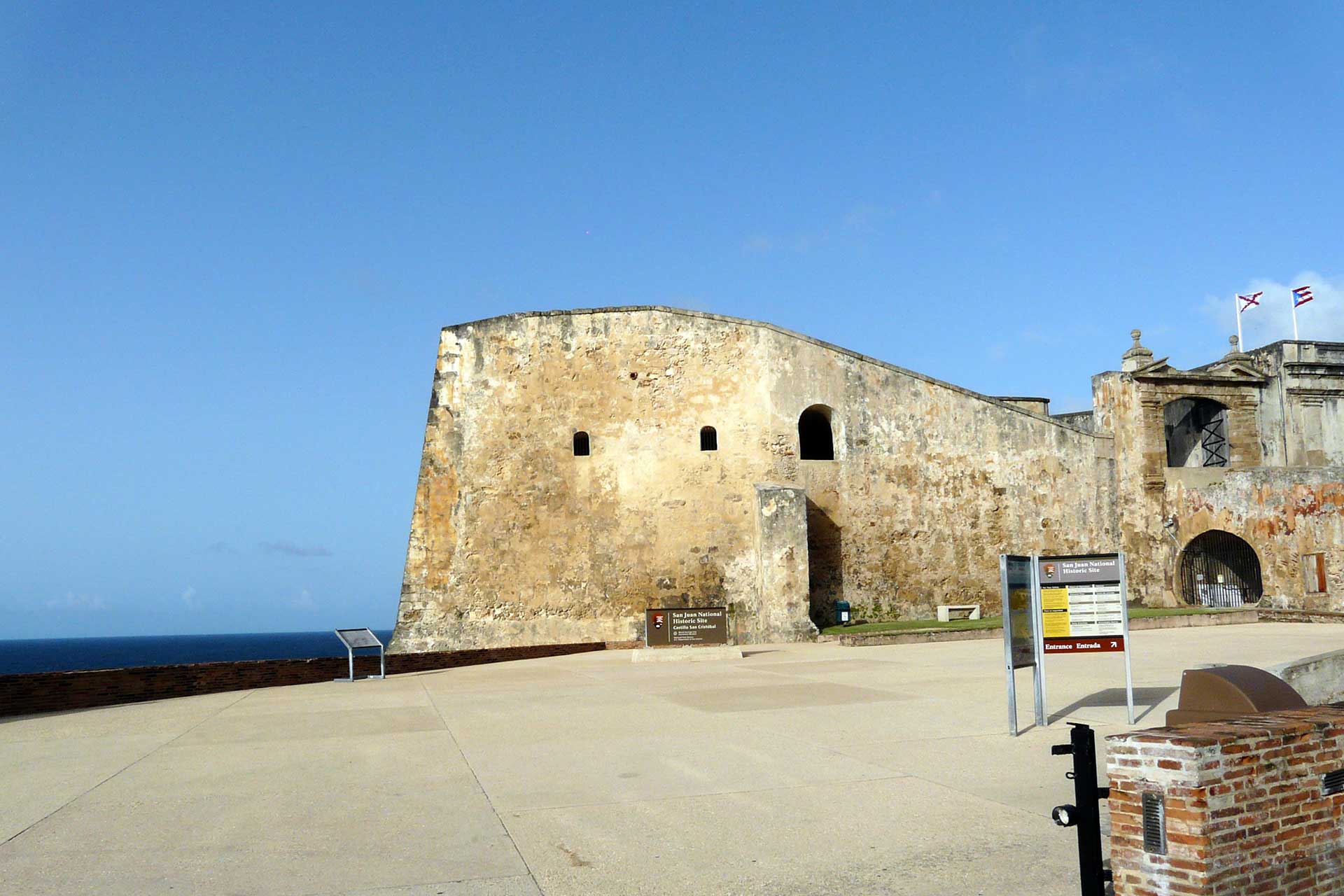 Another outstanding example of Spanish colonial military architecture and engineering in San Juan include the old city walls and the nearby San Cristobal fortress. Built in 1634 (completed in 1771), was considered the Gibraltar of the West Indies. San Cristobal was supported by a massive system of outworks which provided defense in depth and is one of the largest defenses ever built in the Americas. It's a World Heritage and National Historic Site, administered by the U.S. National Park Service.

The Casa Blanca (White House) was built in 1521 and lived in by Ponce de Leon descendants for over 250 years. In 1779 it was taken over by the Spanish military, then used later by the United States as a residence for military commanders (1898-1966). Today the mansion serves as National Historic Monument, housing a museum of 16th, 17th and 18th century history. Each room is decorated in a style associated with a period of the house's history. Casa Blanca is the oldest continuously occupied residence in the Western Hemisphere.

La Fortaleza, built in 1533 was the first of a series of military facilities constructed in the Bay of San Juan, but soon later proved inadequate to guard the entrance to the harbor and became the official Governor's Residence. It's the oldest governor's mansion still used as such in Western Hemisphere and part of the old city's World Heritage Site. The original structure, a palatial building surrounded by gardens was very primitive, a small medieval-style fortress with two round towers. La Fortaleza has undergone numerous changes over its 400 years of history. Today, stands around its 16th-century core is a 19th-century facade with neoclassical motifs and a richly furnished interior.

San Jose Church it is an excellent example of 16th century Spanish Gothic architecture and the only one under the U.S. flag. The walls of this church had to be scraped to uncover the original 16th-century features. Buried under layers of concrete, the restores found one of the earliest murals painted in the Americas - the work of a friar whose identity will probably never be known. 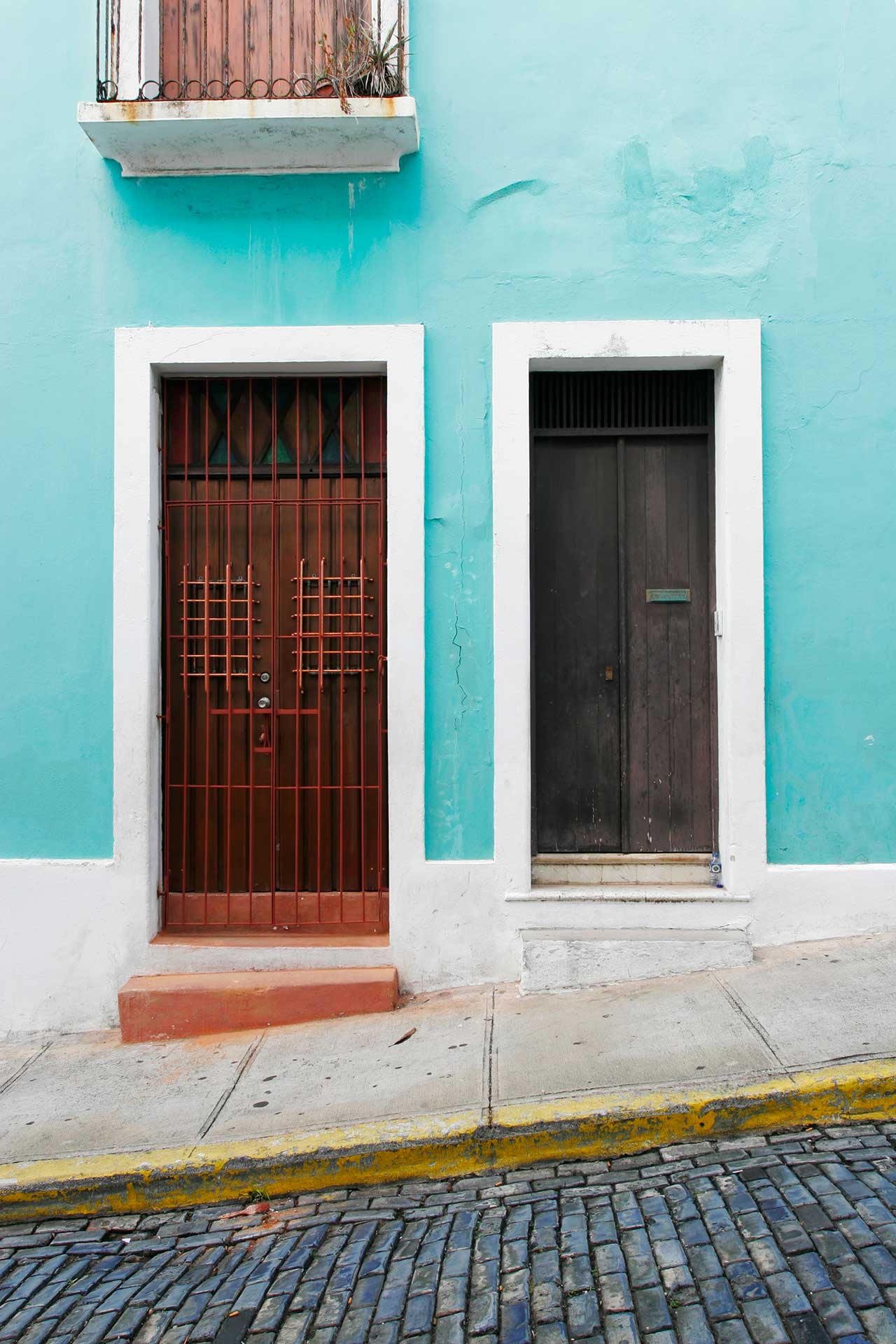 The facade of San Juan Cathedral, added in the early 19th century, is baroque, but it shelters a vaulted tower and four rooms dating from 1540, which are rare examples of medieval architecture in the New World. In 1913 the body of the island's first governor Juan Ponce de Leon was moved here and is now in a marble tomb near the cathedral's transept.

The Dominican Convent, another Old San Juan 16th-century structure and a great example of Gothic and Renaissance architecture now houses the Institute of Culture. Friars began its construction in 1523; served the St. Thomas of Aquinas Convent that housed the Dominican friars.

During the 18th and 19th centuries, the island entered an era of relative tranquility and sustained growth. New trends in architecture, including dramatic Baroque designs, crossed the Atlantic reaching San Juan by the 18th century infusing new architectural traditions into the city's-built environment. Some of San Juan's most impressive extant buildings remain from this period -- both imposing public architecture and 18th-century homes.

Palacio Rojo, built in 1792, this Baroque two-story building once served as the living quarters for Spanish commanding officers. Today it houses administrative offices.

Palacio Episcopal is also another great example, owned by the Catholic Church, the building is still used today as it was when it was built, as the Bishop of San Juan's private residence.

The Paseo de La Princesa is an elegantly landscaped walkway with trees, statues, benches, and street lamps. The promenade sweeps from the cruise piers to La Princesa, built in 1837, this 19th-century prison is now the headquarters of the Puerto Rico Tourism Company.

In Ponce, Casa Armstrong-Poventud is a magnificent example of the neoclassical architectural heritage of the island, its white-domed building on the west side of the main square houses the Puerto Rican Institute of Culture and the Puerto Rican Tourism Company's regional offices.

Yet another notable building, the Museum of Puerto Rican Music, built in the 1850s as the home of a wealthy industrialist traces the rich musical history of the island through memorabilia of famous musicians and displays of Indian, Spanish and African musical instruments. 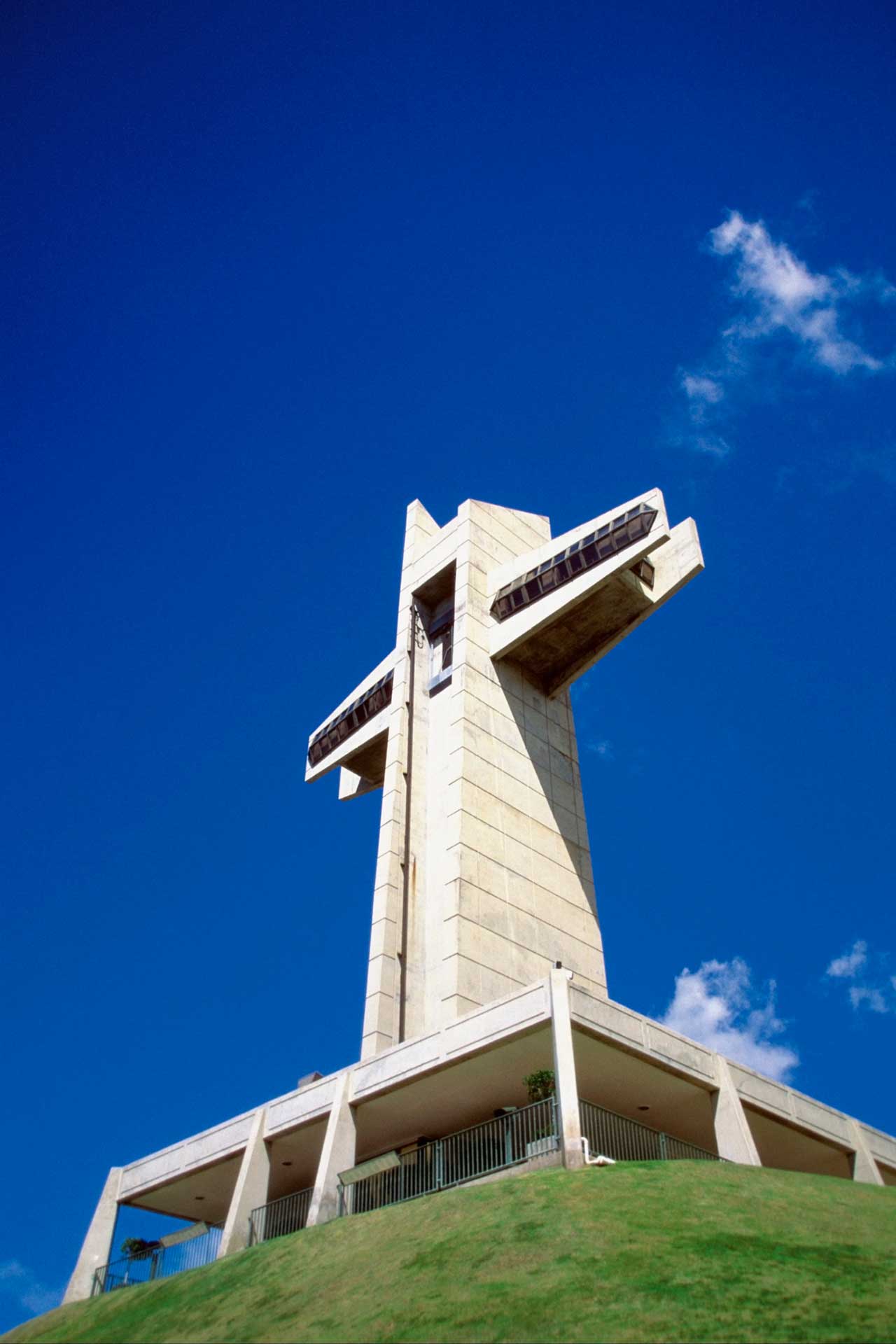 Casa Serralles, the former home of the oldest rum-producing family on the island, the makers of Don Q rum. The Serralles Castle is a magnificent example of Spanish Revival architecture, popular in the 1920's; indoor patio with fountains, beautiful formal gardens paralleling the style of the house, well-manicured flame of jungle plants growing in a pattern that matches the ironwork on the house. It was designed by architect Pedro de Castro and was completed in the early 1930's. Today stands as museum dedicated to the history of the sugar and rum industries.

Plaza del Mercado, the old marketplace, has been converted to an artisans' market, replete with typical foods, fruits, and flowers. Converted from an art deco movie theater, it probably draws more sightseers and consumers that any other complex in the old town.

At Plaza de Las Delicias, Ponce has revived its traditional horse-drawn carriage service. Four carriages offer free rides to visitors. Standing on the square is the boldly painted, century-old Parque de Bombas (Firehouse), originally built in 1882 for an exposition and from 1883 to 1989 it served as headquarters of the Ponce Fire Corps. In 1990, the firehouse was reopened as a museum, after a $140,000 restoration.

In Mayaguez, the Yaguez Theater was built in 1909 by Francisco Maymon Palmer, who brought silent films to Puerto Rico, as a venue in which to show his films. Following a fire in 1919, the building was rebuilt in the baroque style to the specifications of architect Jose Sabas Honore.

The Puerto Rico Tourism Company (PRTC), founded in 1970, is a public corporation responsible for stimulating, promoting and regulating the development of the tourism industry.