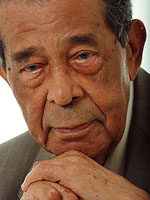 (1905--2005), writer, poet, teacher and critic, was born on July 15, 1905 in Moca. He is the best-known novelist of the 20th century. He graduated from the University of Puerto Rico with a degree in Arts (BA in 1938 and MA in 1941) and a doctoral degree in Arts from the University of Columbia (1949) in New York. His first and best known novel, "La Llamarada" (1935) is considered the most important novel of the Generation of the '30s, it describes the political, economic and social conditions that prevailded in the island. Laguerre was also known as an advocate for environmental conservation. Laguerre is considered the most important Puerto Rican novelist, among his many novels are: "Solar Montoya" (1941), "La Resaca" (1949), "Los Amos Benévolos" (1976) (The Benevolent Masters), and "Los Gemelos" (1992). He was nominated for the Nobel Prize for Literature in 1999. He died on June 16, 2005.

(1876--1944), poet, journalist, playwright, and politician, was born on May 14, 1876 in Juana Díaz. He is the best known of Puerto Rican poets for his beautiaful and romantic work. He was a lawyer by profession, having studied in Spain. His work is known for its "criollismo", a kind of nationalism, and usually writing about the idiosincracy of the island. His books include Al Pie de la Alhambre, Sonetos Sinfónicos, Voces de la Campana Mayor, and Alturas de America. His "decimas" are works not only of art but of love. Among his most famous poems are Valle de Collores and Canción de las Antillas. He died on June 16, 1944 in Santurce.

(1910--), the inventor of the original "Coco Lopez", was born in 1910 in San Juan. He was an agricultural professor for the University of Puerto Rico. In the early 1950s, with some grant funds from the government (awarded to University of Puerto Rico), he worked on his idea, He developed a way to extract the cream from the pulp of coconut, which at the time was a difficult task. He did this by blending the cream of coconuts with the exact proportion of natural cane sugar, creating the original "Coco Lopez".

Coco Lopez soon became the basis for the famous "Piña Colada" drink, which made its first appearance in 1954.

Lopez Irizarry became a millionaire and his product "Coco Lopez" has expanded its distribution into 50 countries including Europe, Japan, Central America and the United States. Coco Lopez can be found at corners stores and supermarkets around the world.

(1919-1979), writer and playwright, was born on October 4, 1919 in Arecibo. Marqués was a distinguished playwright, short story writer, novelist, and essayist. His best-known play, "La Carreta", opened in 1951 and helped secure his reputation as the leading literary figure in Puerto Rico during 1950s. In 1959 he published three plays together in the collection Teatro. These were "La muerte no entrará en palacio", "Un niño azul para esa sombra", and "Los soles truncos". He died on March 22, 1979 in San Juan.

(1895--1983), poet, writer, professor and a prestigious critic of Puerto Rican and Hispanic American literature, was born on January 21, 1895 in Caguas. She was an elementary and secondary school teacher. Her essays, a product of serious investigations, have been published in the most important publications on Hispanic literature. Her writings have been compiled in fifteen volumes by the Editorial Cultural. Some of these include: "Asomante", "Amado Nervo" and "La inquietud sosegada". She died on June 26, 1983 in San Juan. 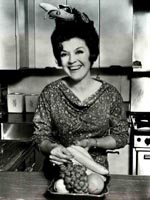 (unknown), actress and singer. She was the most famous Miss Chiquita Banana. In 1945 and 1946, she made numerous personal appearances in the movies, in radio and commercials.

(1857--1896), musician and composer, was born on May 16, 1857 in Ponce. He was the most important figure in Puerto Rican music of the 19th century. His first teacher was none other than the illustrious pianist-composer Manuel G. Tavarez (a Parisian trained composer and former pupil of M. Alphonse Laurent and M. Daniel Auber), who also wrote some of the most beloved Danza repertory for the piano. He composed countless danzas, the dance (along with the bomba and plena) most closely associated with Puerto Rico. "Felices Días", "Vano Empeño", "Mis penas", "Tormento", "Alma Sublime", "La Lira Ponceña", "Alma Sublime" and many others are among his most famous compositions. It's calculated that Morel created more than 550 compositions of which more than 300 are danzas. He died on May 12, 1896 in Ponce.

(1931--), actress, was born on December 11, 1931 in Humacao. This Puerto Rican actress has secured a distinct place in movies, notably because of her role in Robert Wise's 1961 film West Side Story about Puerto Ricans in New York, which brought her fame and an Oscar as best supporting actress. She also appeared in such hits as Singin' in the Rain (1956), and Tennessee William's Summer and Smoke (1961), starring Geraldine Page. Her work in television included appearances on The Muppet Show and The Rockford Files. Rita became the first woman ever to win all four biggest awards in show business: Oscar (movies), Tony (Broadway Theater), Emmy (TV), and Grammy (recording).

(1898--1980), poet, journalist and politician, was born on February 18, 1898 in San Juan. Educated at Georgetown University in Washington, D.C., United States, Muñoz Marín was once known as the New Deal's Golden Boy. Founder of Popular Democratic Party (1938). Although he had started out as a supporter of Puerto Rican independence, he later opted for the commonwealth status as economically more viable. Muñoz Marín worked closely with the U.S.-appointed governor, Rexford G. Tugwell, to improve housing, farming, and industrial conditions. He campaigned for land redistribution from large landowners to small farmers and claimed islanders were not yet ready for economic independence. The slogan "Bread, land, and liberty" won a large following among the poor. He began "Operation Bootstrap," to attract mainland business investment through the Puerto Rican Industrial Development Corporation. As Puerto Rico's first elected governor (1949-65), he helped draft its constitution and in 1952 presided over its attaining the status of a self-governing Commonwealth. He was reelected as governor three times; Muñoz Marin served in this post from 1949 to 1965. In 1960 his election was opposed by the Roman Catholic Church in Puerto Rico, which denounced him for advocating the teaching of birth control; he was easily reelected despite the opposition. In December 1963 he received the U.S. Presidential Medal of Freedom. He did not run for reelection in 1964, but served once again in the Senate of Puerto Rico. He died on April 30, 1980 in San Juan.

(1859--1916), poet, journalist and politician, was born on July 17, 1859 in Barranquitas. Father of Luis Muñoz Marín. He founded the newspaper La Democracia, which crusaded for Puerto Rican freedom from Spanish domination, later edited by his son Luis Muñoz Marín. Muñoz Rivera was president of Puerto Rico's Liberal Party and a leading spokesman for autonomy. A leader in the campaign for independence from Spain, he obtained (1897) a charter, which was never put into effect, that granted some autonomy to Puerto Ricans. He founded the Federal Party in Puerto Rico in 1899. Heading the first Puerto Rican cabinet under U.S. occupation, Muñoz Rivera opposed military governorship and pleaded for greater self-government. Faced with bitter opposition in Puerto Rico, he moved to New York City and published the Puerto Rico Herald, which expounded the island's problems. As resident commissioner of Puerto Rico in Washington, D.C. (1910-16), he obtained U.S. citizenship for Puerto Ricans. He died just before passage of the Jones Bill, for which he had fought. He is the best of the Puerto Rican lyricist and political poets. His most important work was his book of poems Tropicales. He died on November 15, 1916 in San Juan.

(1833--1917), painter, was born on June 17, 1833 in Bayamón. Greatly influenced by the European art world, Oller studied in Spain and Paris, although it meant abandoning his wife and children for 11 years. Following such painters as Picasso and Cézanne, Oller became the first Latin American impressionist, adapting their obsession with light and color to tropical skies. He was also a realistic painter of landscapes and still lifes in Puerto Rico, brilliant capturing the local flora. His best-known work "El Velorio" (The Wake) (1893), which was shown at the Paris Salon in 1895. He died on May 17, 1917 in San Juan.

(1898--1959), poet, was born on March 20, 1898 in Guayama. He was one of the creators of Afro-Antillian poetry, which introduced African rhythms and words into the Puerto Rican poetic idiom. Works such as "Tuntún de Pasa y Grifería" and "Ultimos Poemas" led many to think him Puerto Rico's most important 20th-century poet. His black or negroid poetry is so well known that people forget the exquisite works he produced in other genre. Among his best known poems are "Esa Mujer," "Danza Negra," "Majestad Negra," "Mujer Encinta," and "Pero Ahora, Mujer." He supported himself by working as a civil servant. He died on Febraury 23, 1959 in Santurce. 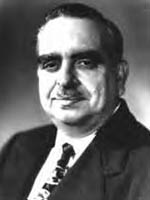 (Ernest Anthony Puente Jr.) (1923-2000), musician, was born on April 20 in New York City, of Puerto Rican parents. He formed what became the Tito Puente Orchestra and became a leader of the mambo and cha-cha-cha fads in the 1950s and for the next five decades helped define Latin jazz in the United States. He recorded more than 100 albums and won five Grammys in his more than 60 years in the music business. Some fusing Latin with other musical styles and traditions. He died on May 31, 2000 in New York.

The biggest JC Penney in the world is located in Plaza Las Américas mall in Puerto Rico.